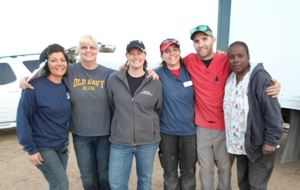 The Arizona Humane Society recently assisted in the rescue efforts of more than 100 dogs who were transported from the Olympic Animal Sanctuary (OAS) in Washington to the Rescued Unwanted Furry Friends Foundation (RUFFF) in Golden Valley, Arizona.

A team of six AHS medical and emergency personnel spent two days completing medical exams and vaccinating the 100-plus animals, many of which were underweight and suffering from muscle atrophy consistent with being malnourished and from lack of movement.

The dogs arrived at the sanctuary on Christmas Eve via a climate-controlled 53-foot trailer driven by Steve Markwell, the founder of OAS, after he left Washington following demonstrations from animal rights activists. AHS was contacted by RedRover, a nonprofit organization based in San Francisco that provides emergency sheltering and relief services throughout the country, to help assist Guardians of Rescue, a New York-based nonprofit organization who coordinated the rescue efforts and placement of the dogs into partner rescue organizations upon completion of their medical exams.

AHS was proud to support the efforts of the various organizations who stepped up to care for these amazing animals.