The Dogs of Dorian: Nearly 100 rescues are coming to US for adoption 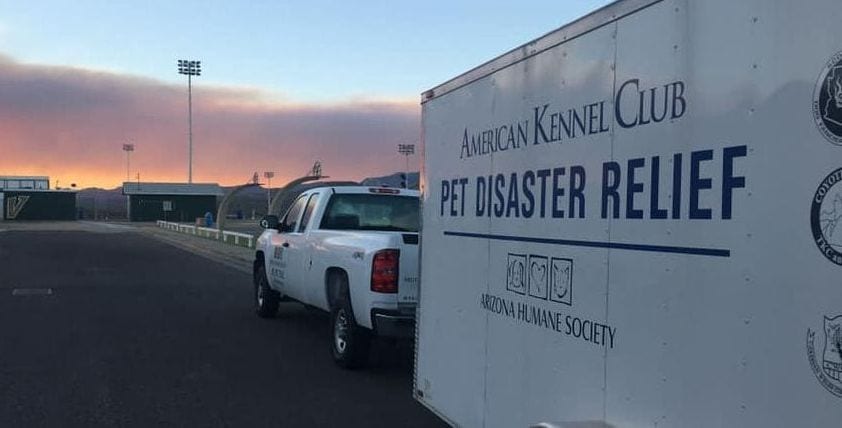 As Hurricane Dorian descended on the Bahamas, one woman took it upon herself to harbor nearly 100 dogs that were either stranded, abandoned and likely alone.

The hurricane — with a death toll of 50 people and 1,300 missing as of Sept. 9 — has left thousands of survivors without homes and has also caused people to lose contact with their dogs.

While some dogs were lost in the storm, others may have been left behind in an attempt to get families to safety. Now, hundreds of dogs are in need of being brought to safety, and provided with medical care and food, according to animal care organization Guardians of Rescue.

In turn, Guardians of Rescue has helped bring in dogs on chartered planes from the Bahamas to safe spots in Florida and New York.

And according to Robert Misseri, the organization’s president, some may have already found a new forever home in Arizona.

“We are no strangers to helping dogs in dire situations, this is exactly why our organization exists,” Mr. Misseri stated. “We will do everything we can to help as many dogs as we are able to, but we can’t do it without the help of the public. This is going to be a very costly endeavor, so we can use all the financial assistance we can get.”

And it’s mainly financial donations that they need. Mr. Misseri said they are good on supplies, but it’s the money that will aid them in getting the dogs to the U.S. and provide treatment.

Chella Phillips, a Nassau, Bahamas resident who manages The Voiceless Dogs of Nassau, gained international recognition when she took in nearly 100 stray dogs as Hurricane Dorian was approaching to provide them a safe haven.

Mr. Misseri said Guardians of Rescue’s main focus in the Bahamas is working with her to bring the dogs back to the U.S. The group currently has people on the ground in the Bahamas.

“Their morale is great,” Mr. Misseri said about his team. “We swap them out, so they don’t get fatigued. We’re expanding all over the Bahamas, evaluating the seriousness long term.”

Guardians of Rescue is helping bring nearly 100 dogs to the United States in wake of Hurricane Dorian in the Bahamas. [Submitted photo]
On Sept. 9, the organization brought back the first 30 dogs, and plan to relocate a total of 98 in the U.S. The group has teamed up with Animal Aid USA and Animal Wellness Foundation to help prepare and load the first group of dogs that were airlifted to safety in Florida.
The ultimate goal — after the dogs are fed and receive health examinations — is to find them new permanent homes. More flights are scheduled in the days ahead, until all of the abandoned animals are in safe haven.

“They’re doing pretty good,” Mr. Misseri said about the dogs as they’re flown roughly two hours from the Bahamas to the U.S. “They’re not stressed out the way you’d normally think they would be. You just have to make sure the flights aren’t too long.”

He said adoptions will come from all over the country, adding he heard some of the adoptions are from Arizona. They will be posting more about the adoptions in the weeks ahead.

The organization needs financial donations to assist with the large-scale dog rescue in the Bahamas. Those who want to donate can do so online.

Guardians of Rescue — while based in New York and with a chapter in Miami — provides help to animals on the streets there and in many places beyond where their chapters are located.

Mr. Misseri said they were in Golden Valley, Arizona years ago when they were helping in an animal neglect case. They set up an emergency shelter and wound up taking in over 100 animals.

In Arizona itself, the Arizona Humane Society is billed as the state’s designated responder for animals in distress during natural disasters. During those times, the AHS sets up temporary shelters where needed while its Emergency Animal Medical Technicians apply their Federal Emergency Management Agency and wildland firefighter training to save lives.

According to its website, the AHS has made deployments to the 120,000-acre Woodbury Fire in Gila County earlier this year, Hurricane Harvey in 2017, the Cedar Fire in 2016 and Yarnell Hill in 2013.

“We haven’t received any outreach from organizations in the hurricane affected areas but are always willing to lend a helping hand when needed and if capacity allows,” Ms. Dickerson said about Hurricane Dorian. “While the Arizona Humane Society does focus on helping pets here in the Valley and cares for more than 16,000 sick, injured and abused pets locally, we are always looking for new ways to help save as many lives as possible.”

In 2015, the AHS received a Pet Disaster Relief Unit from AKC Reunite through its Canine Support and Relief Fund. The trailer contains materials to set up an emergency shelter for pets and service animals.

The AHS also collaborates with other shelters, rescues and animal welfare groups throughout Arizona to bring in additional animals through its New Hope and Project Outreach programs. These allows the AHS to take in pets from other organizations when they are overrun and the AHS has additional space.