Sandy’s new dad, Bruce, shares how he not only saved her life, but she saved his. Read their story and vote to help the Arizona Humane Society win an additional $25,000 from the 2016 Petco Foundation Holiday Wishes campaign.

The first time I saw Sandy was in a photo that my daughter, Leanne, texted to me with the question: “Want to foster?” 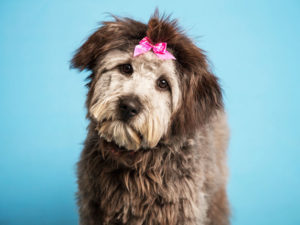 Leanne had succeeded several years ago in convincing my late wife, Kathy, to adopt Muffin, who we decided would be our  retirement dog. But after Kathy and Muffin went out for their evening walk in December 2013 and were fatally struck by a truck while crossing the street, my world collapsed. For two years, I resisted Leanne’s ceaseless search for a four-legged companion to help remedy my pain.

After rejecting hundreds of Leanne’s suggested dogs, Sandy’s story gave me pause. She had been hit by a car and was found barely alive under a couch in a dry canal bed. Alone in the world, she was taken to the Arizona Humane Society (AHS) where she received emergency surgery to repair a pelvic fracture and, exhibiting extreme fearfulness, needed foster care to aid in her recovery.

Soon, Sandy was back on four legs, running in the backyard in great leaps, complaining in poodle grunts and sharing my and Kathy’s favorite weekend breakfast treat: Sausage McMuffins. 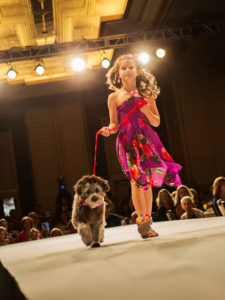 As the deadline for my adoption-proof strategy neared, Sandy became a regular fixture on the furniture and in my heart. On our way to return Sandy to AHS, I made a detour to McDonald’s, where I purchased her a Sausage McMuffin to celebrate our time together that I no longer wanted to end. As I said goodbye, I thanked Sandy for helping ready me for dog ownership again.

What came next was a total shock. Friends and family surprised me with fundraiser and adoption raffle tickets. What had begun as an elaborate strategy to avoid adopting Sandy had become exactly the opposite. When they announced my name as Sandy’s adoption winner, I thought of Kathy and Muffin. On our way home, Sandy and I made a quick detour through the drive-thru for the first of many more Sausage McMuffins.

Sandy’s story is one of 54 finalists for the 2016 Petco Foundation Holiday Wishes campaign. Vote for her story to help Arizona Humane Society win $25,000.