EAMT™ Juju Kuita was shocked when she saw the softball-sized mass hanging from Gus’ neck. 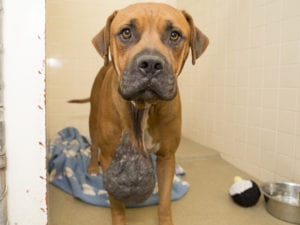 “We see a lot of neglect in our line of work and we rescue injured pets off the streets every day of the year, but this dog was one of the worst I’ve seen. To think that someone just tossed him out on the streets in agonizing pain and refused to get him medical treatment simply broke my heart,” said Kuita.

Juju brought Gus to AHS’ Second Chance Animal Trauma Hospital™ where he was seen by AHS Veterinarian Dr. Yasmin Martinez. Despite possible complications due to his age and the size of the mass, Dr. Martinez determined Gus was strong enough to undergo surgery.

“Last year over 11,000 animals were treated in our Second Chance Animal Trauma Hospital but never have I seen a tumor that big. Gus has so much love and we wanted to give him a chance at a happy life,” said Dr. Martinez.

Gus’ 3.5-pound tumor was successfully removed and biopsy results were sent in to the lab to see if the tumor was cancerous. Tests came back negative! 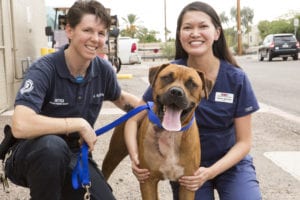 A New Life for Gus

Now the six-year-old Boxer is happy and healthy and enjoying life in a new home.

We don’t know how long Gus was in his previous condition, but we do believe he was someone’s pet at one time. It is yet to be determined if this is a case of animal cruelty or neglect. 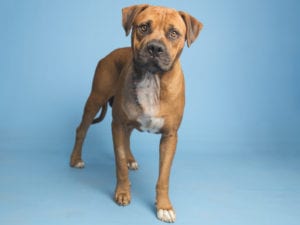 Gus’ surgery, which cost thousands of dollars, was made possible by generous donations of pet lovers who support the Arizona Humane Society.

Help us save lives like Gus’ and give now.

Check out the Story on 3TV: