Judith was Determined to Adopt a Kitten Named Mr. Chicken, but Fate had Plans that were a “Little Bit” Different.

It was the Saturday of the Arizona Humane Society’s 60th Anniversary, and it was hot. I remember hearing on the radio just before going into the shelter that it was 114 degrees. 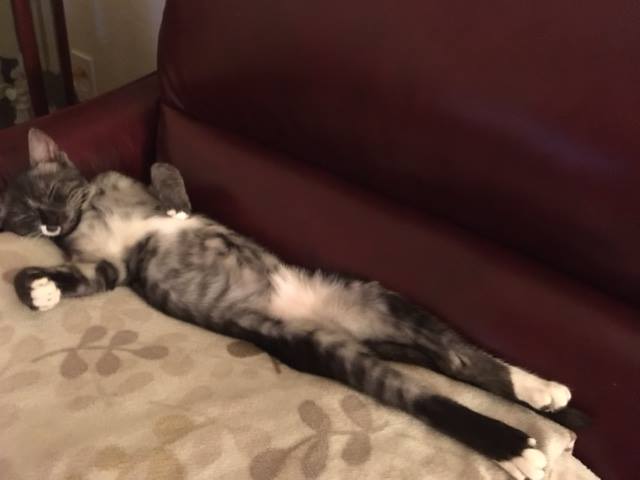 I went to adopt a specific cat during the celebratory adoption special and was so hoping that he would still be there when I got there, as I had chemotherapy in the morning and did not arrive till after 11:30 a.m. I was so excited. I was going to adopt, Mr. Chicken, a kitten than I had found on AHS’ website. In my mind, it was a done deal and I was going to call him Nugget.

I was getting sore and tired standing in that long line. I leaned on my walker in the heat with limited shade, wondering if I would make it. Nearly an hour had gone by, but there were only two groups ahead of me and Mr. Chicken is still there. So excited! The door opened and the next two groups were let in. Now the only thing between me and Mr. Chicken was the glass door and I could see him! Oh no, the couple two ahead of me in line were taking him out to look at. I wanted to bust through that door and scream, “No, that is my kitty!” but they looked like a nice couple. Then I thought that maybe they will not like him when they take him in the little room, but they did. I started to leave when I heard a small voice inside my heart say, “You came to adopt a kitten, I bet that there is another kitten here that you could love.”

One kitty was named Cassidy, and she is now known as Little Bit. She immediately made my heart melt and came home with me that day!

I was not sure how my older cat, Amore, would feel about having another cat in the house, but Amore and Little Bit quickly became best buddies. They play so nice and they love to relax together. 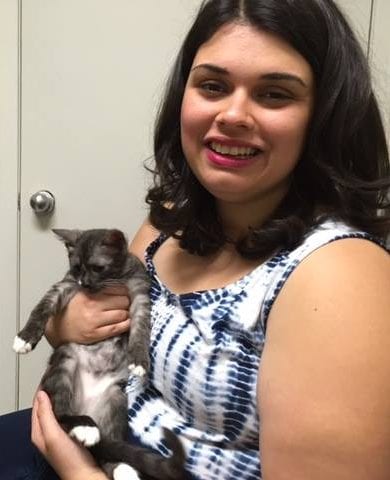 Amore was also adopted by me from AHS in April of 2014. She had been brought in by a Good Samaritan who found her with a gapping injury to her side that looked as if she had been attacked by a much larger, stronger animal. After surgery, she was so blessed as she had an opportunity to begin her recovery with a Foster Hero named Stan, and had healed nicely. I always let her know that as Stan blessed her life, she has blessed mine.

I have bone cancer and chronic myeloid leukemia, so I work from home. I now have only one living family member, my brother back in Boston, but now I have both Amore and Little Bit. They are my family and they are my companions. I cannot imagine how lonely it would be without my two furbabies!