As summer nears end, no child, pet in Maricopa County has died in hot cars 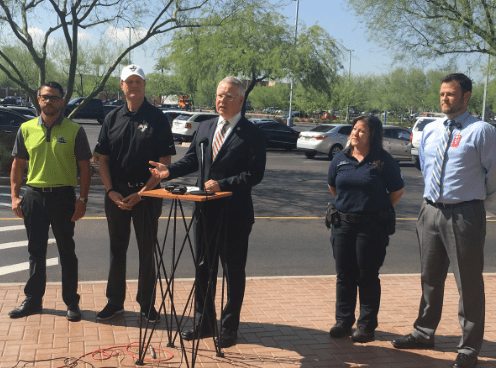 PHOENIX — No small child died from being left in a hot car in metro Phoenix during the bulk of summer, a Maricopa County official announced Thursday, the last day of an area campaign created to help make that a reality.

The county had also achieved zero vehicular heatstroke deaths in 2016.

The 2018 campaign officially ended Aug. 31, “We’re celebrating,” Montgomery said, but he added, “It’s still too hot to let our guard down.

“We want to maintain that success through Saturday (the first day of fall).”

Montgomery said nationwide, there had been 46 vehicular heatstroke deaths of children. That was close to the deadliest summer of 2010, when 49 children died.

“Phoenix Children’s Hospital could not be happier that we’ve had zero vehicular heatstroke deaths this year,” said Todd Nickoles, a trauma manager for the hospital.

He also said cooling temperatures shouldn’t be taken for granted when children and pets are in the car.

“Heatstroke is still a risk and most fatalities that have occurred have been on 80-to-90 degree days.”

Ruthie Jesus of the Arizona Humane Society said her office responded to 24 calls about dogs and cat left in hot cars during the campaign.

“We were very happy that not a single time were we too late,” she said.

She added that oftentimes the interior temperatures of a car was up to 70 degrees hotter than outside.

“Keep making those calls,” she said.