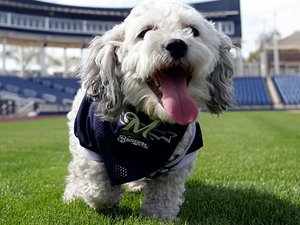 Hank, “The Ballpark Pup,” who gained international fame after being found as a stray and adopted by the Milwaukee Brewers during spring training last year, is coming back to Phoenix to help out his furry friends at the Arizona Humane Society.

Hank will be at Maryvale Baseball Park on Saturday, March 28th for the Brewers’ spring training game against the Cleveland Indians, where he will team up with AHS for an “adopt-a-pet” event and fundraiser. The game will begin at 1:05 p.m., and Hank will be available for photos for approximately 30 minutes on the right field concourse immediately following the Famous Klement’s Sausage Race in the middle of the sixth inning. Fans will have an opportunity to take a photo of Hank in exchange for a voluntary donation to AHS to help care for all of Hank’s friends still searching for loving families. (NOTE: Because of the heat and concern for Hank’s well-being, only a limited number of fans will be able to be accommodated.)

AHS will also have adoptable dogs on hand who are seeking forever homes.

Hank’s story started when he first appeared at camp on February 17, 2014, the day of the first workout for Brewers pitchers and catchers. That morning, he wandered up to staff at the Brewers Maryvale facility after clearly being a homeless stray for an extended period of time. Hank’s story quickly went viral, and his connection to the team became official when he found a permanent home in Milwaukee the following month.