Disco Stu, a 7-year-old Border Collie mix, arrived at AHS in early September 2019, when a Good Samaritan found him after he had possibly been hit by a car, fracturing his tail. He was treated in AHS’ Second Chance Animal Trauma Hospital™ for 61 days, but it was Disco Stu’s fearful behavior that proved to be his biggest challenge.

Disco Stu actively avoided contact with those who were trying to help him, and would lie in his kennel very tense, with wide eyes, and attempt to get as far away as possible from visitors. It was very clear that Disco Stu needed a strong boost of confidence and some positive social interaction with people, so AHS’ Behavior Team set out to do just that through training and enrichment. 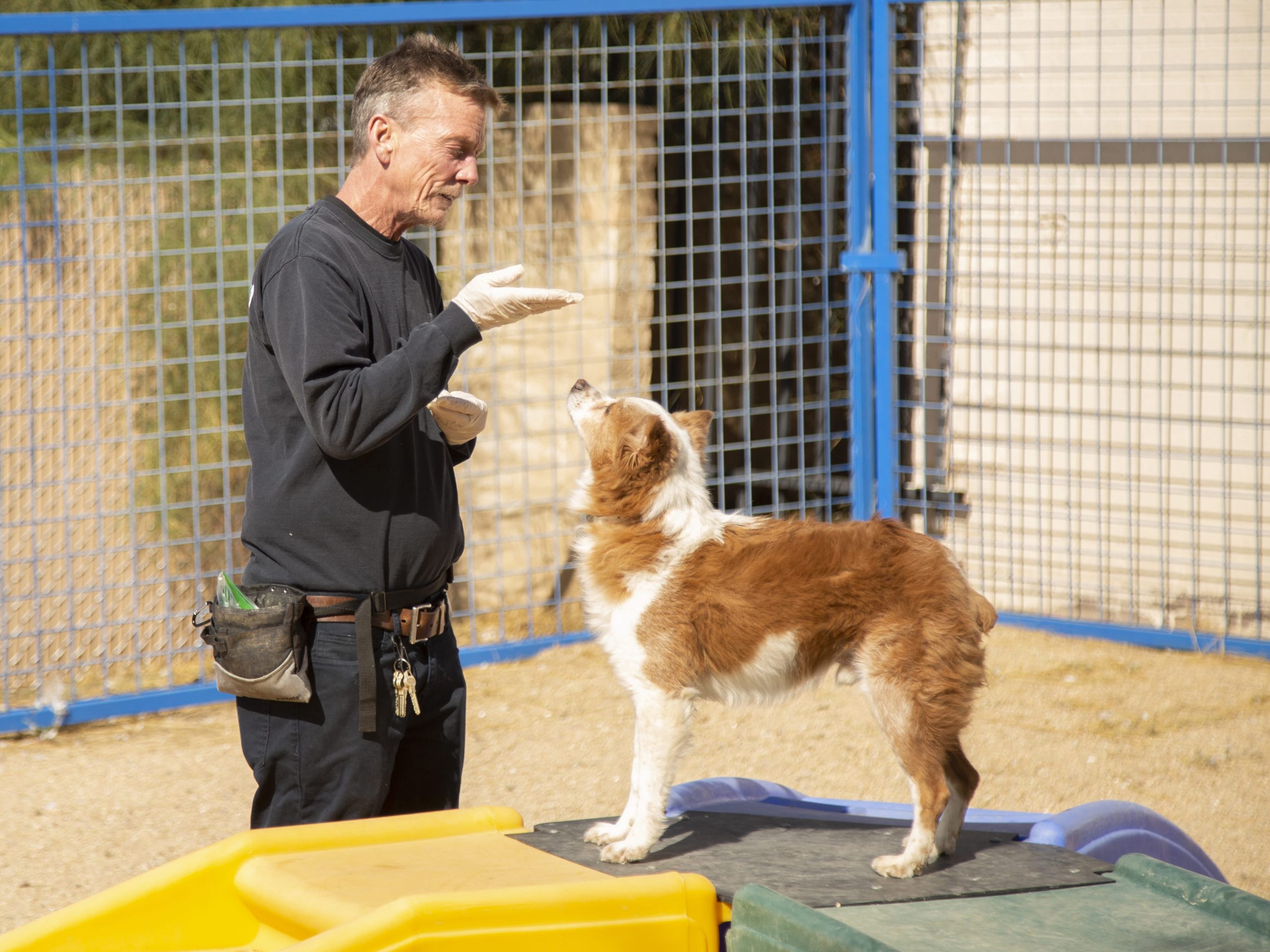 AHS’ Behavior Supervisor, Jenny Dagnino, knew the importance of offering choices to fearful dogs, which is why she developed a plan to practice hand targeting with him. Hand targeting encourages a fearful dog to touch a person’s hand in order to earn a reward (Disco Stu’s favorites are meatballs and hot dogs) and helps them to make a positive association with a hand reaching towards them.

With some time and patience, Disco Stu eventually began targeting our Behavior Team members’ hands and gradually became more and more relaxed around people… even approaching them for pets!

“The most rewarding feeling is seeing that progression and watching Disco Stu come out of his shell,” Dagnino said. “He went from cowering and backing away to approaching people for attention. He ultimately made a good impression on his new family with his improved social skills.” 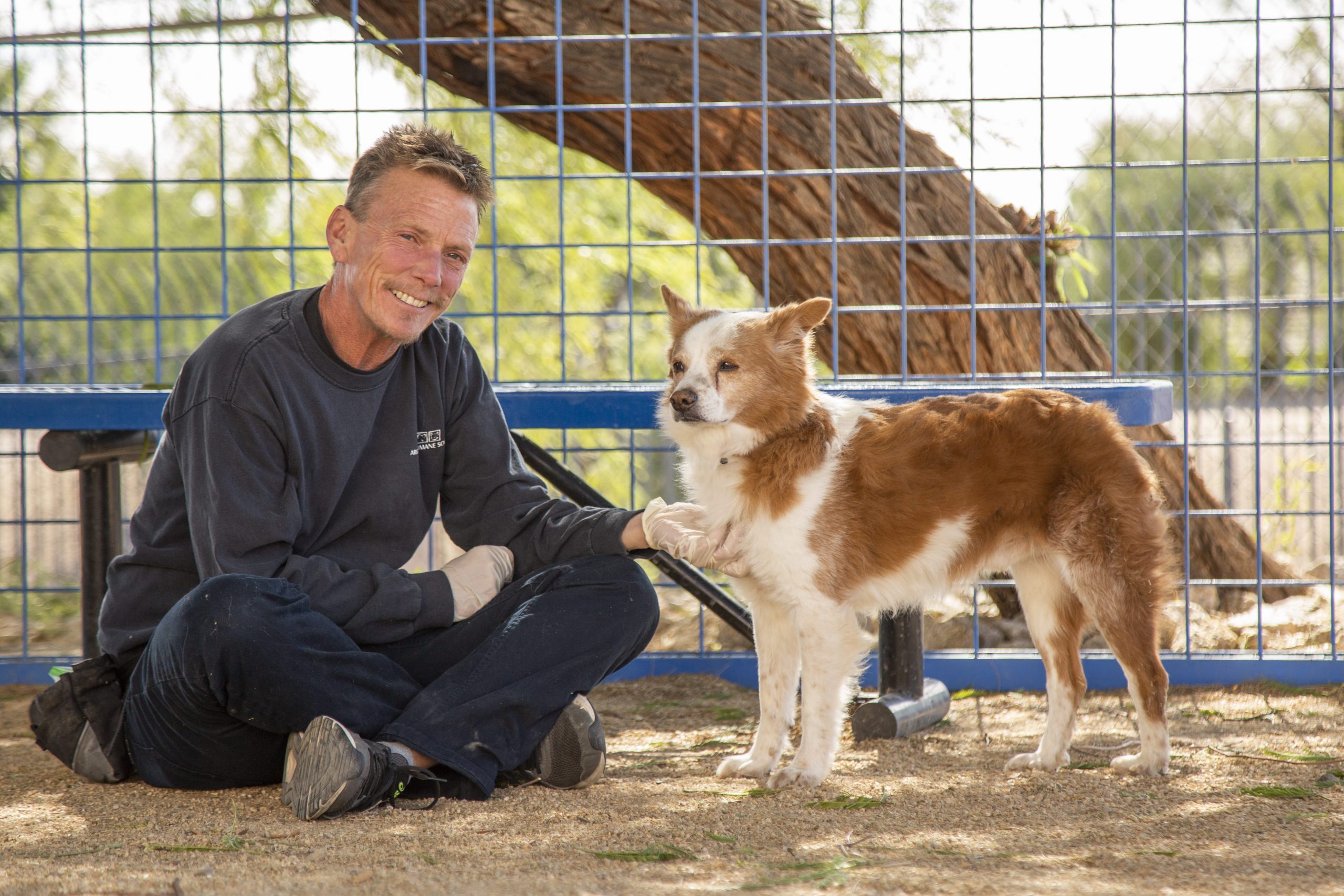 Providing pets with mental and physical stimulation is critical for their behavioral health. Enrichment encourages a pet to explore their natural behaviors, strengthens their bond with people, builds confidence, and ultimately keeps life interesting. Mik Moeller, AHS’ Animal Experience Supervisor, felt that enrichment was just what Disco Stu needed to overcome his fears, and rallied the troops to make it happen.

Volunteers and staff members worked with Disco Stu daily by offering treats when he would come to the front of the kennel, taking him on outings, bringing him to offices, and more. After a while, Disco Stu would eagerly wait at the front of his kennel for his new friends to interact with him, take him out, or feed him! He even began to show his silly side off by romping around like a puppy, play bowing, and giving affection.

“He now smiles a smile that will melt your heart,” Moeller said. “He has found his true doggie self!”

Disco Stu came a long way since his arrival at AHS – from not taking even the yummiest of treats, to actively engaging with friends and strangers alike, he finally found the confidence he has always needed. Just four days after he was cleared for adoption, Disco Stu found his furever home and is loving his new life in Mesa!

AHS’ Behavior Team works with homeless dogs and cats to provide enrichment and socialization opportunities that help make every interaction, every day, as positive as it can be for our pets on the road to their new life.