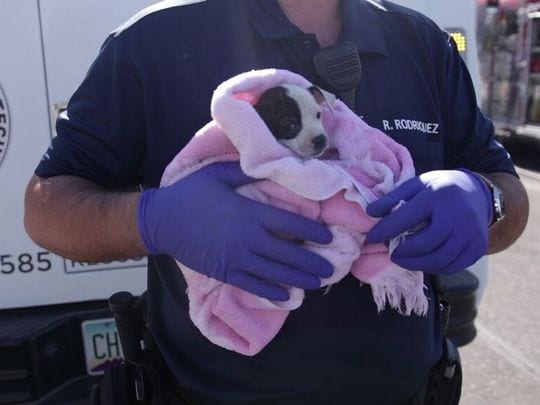 Nine puppies are on the road to recovery — and a new home — after being pulled from a flaming home in Phoenix on Thursday.

The Arizona Humane Society helped fire officials rescue the puppies, as well as 14 adult Chihuahuas, after a house ignited near Hermoso Park.

Two other dogs and one puppy died in the fire, according to Bretta Nelson, a Humane Society spokeswoman. The rescued animals were taken to the Humane Society’s trauma hospital to be treated for smoke exposure.

As of Sunday afternoon, four adult dogs and all of the puppies remained at the hospital, Nelson said.

The puppies, who range from 4 to 6 weeks old, were surrendered to the Humane Society, Nelson said. After they recover, they will stay in foster homes until they are old enough to be adopted.

The adult Chihuahuas will be admitted to the Humane Society as part of its Project Assist program, which provides temporary shelter for pets when their owners experience an emergency. Nelson said they will return to their owner within the next week.

About half a million pets are affected annually by fires, according to the United States Fire Administration.