It took a team of EAMTs hours to remove the rabbits and safely transport them to the Arizona Humane Society’s isolation area, an extension of AHS’ Second Chance Animal Trauma Hospital™. Since, AHS’ medical and animal care teams as well as Foster Heroes have been caring for the rabbits and several babies, many of whom were housed together in extremely inadequate housing conditions. 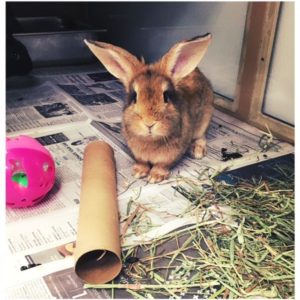 After several weeks of medical care, including spay/neuter surgeries, many of the rabbits, ranging in age from 14 weeks to 2 years, are now ready to be adopted. Due to the sheer volume of rabbits, AHS was in need of help in placing and adopting out the rabbits. That is when longtime AHS partners, Phoenix-based PetSmart Charities and PetSmart stepped up to the challenge. Not only did the PetSmart store locations offer the support of their retail space to help adopt out the rabbits, but PetSmart Charities, the leading funder of animal welfare in North America, provided AHS with emergency grant funding to help offset the costs associated with caring for so many rabbits at one time. In addition, longtime AHS rescue partner Brambley Hedge Rabbit Rescue also stepped in to take some of the rabbits into their care.

In honor of the rabbits and their second chance, PetSmart Charities and AHS will be hosting a special event to find these rabbits the homes that they deserve. Rabbits make exceptional pets, but there are special care instructions and considerations when owning a rabbit that families should take into account.

Currently, four other PetSmart stores in the Phoenix area have rabbits from this case up for adoption and 15 rabbits have already been adopted through the partnership. The remaining rabbits are currently in AHS Foster Hero homes and will soon make their way into PetSmart stores as well.

Learn More About Caring for Rabbits