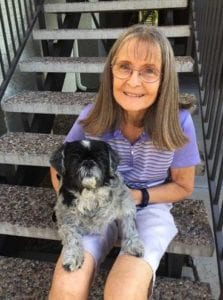 Cynthia Todd has a passion for dogs, especially for senior dogs that find themselves homeless after their owners pass away, become incapacitated or simply can’t care for them any longer.

She’s putting her feet where her heart is and has challenged herself to walk 60 miles in three days in mid-February to raise funds to promote the adoption of senior animals through the Arizona Humane Society.

Her Funds for Old Friends fundraiser will funnel all donations to the organization to be used to “promote the adoption of homeless senior animals” by underwriting the adoption expenses.

The 66-year-old Ahwatukee resident was prompted to undertake the fundraiser after the loss of her own aging and special-needs Shih Tzu named Gizmo, whose various ills and pains necessitated being put down at age 13 ½ last May.

“I just have a really, really special place in my heart for dogs, and any animal going through a hard time,” she said. “This is my tribute to Gizmo.”

Gizmo was a 2004 Christmas present from her husband, Bill.

“Gizmo was a puppy mill dog and was probably taken from his mother too soon. When I got him, he was so tiny he fit in my hand and weighed about half a pound. He didn’t get a good start in life, but I knew he had needs and I was okay with that, but I sometimes wondered what would happen to him if I passed away first,” she said.

Following the death of her husband in 2011, Todd moved to Ahwatukee to be closer to her son, real estate broker Ben Quillinan. She is now employed part-time as field service manager at her daughter-in-law’s Ahwatukee real estate company, Rachel Richards Realty.

It was while walking in Ahwatukee that the idea for Funds for Old Friends came to her.

“I volunteered at a number of charities but hadn’t found one that was a good fit for me. I do feel a need to help others, though, so I’ve tried to think of ways to use what I love to be of service in my community,” the seven-year Ahwatukee resident said.