A Chamorro woman will be on Animal Planet’s “Animal Cops Phoenix” premiering Feb. 19.

Ruthie Jesus, who was born on Guam from the Agat clan of Familian Guspot, is an animal cruelty investigator for the Arizona Humane Society.

The show follows the work of the organization’s investigators and emergency animal medical technicians as they rescue sick, injured and abused animals.

Jesus lived on Guam until she was 4. She visits often, but doesn’t know much about the local stray animal population or animal abuse cases, though she always recommends spaying or neutering pets to prevent overpopulation and to improve a pet’s health and temperament. 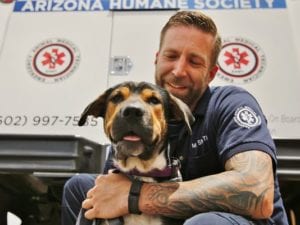 The reality show “Animal Cops Phoenix” can be viewed in a couple of ways. It can be watched as an engaging drama about people who rescue sick, injured and abused animals. Or, you can see it as a great way to learn more about the Arizona Humane Society.

“There are so many different things people can take away from the show,” says Bretta Nelson, spokesperson for the society. “Everyone can watch the show, and if it leads to awareness for our non-profit organization and more funding and an increase in adoptions? Then we’re really going to be happy.”

“Animal Cops Phoenix” is a part of a franchise on the Animal Planet network. Just like “NCIS,” there are editions set in different cities, including “Animal Cops Houston” and “Animals Cops Miami.”