12 News & Daily Mail: Puppies Rescued from Under a House by the Arizona Humane Society

Injured dog and her SEVEN puppies are pulled out from underneath a home that was about to be demolished during a two-hour rescue operation. 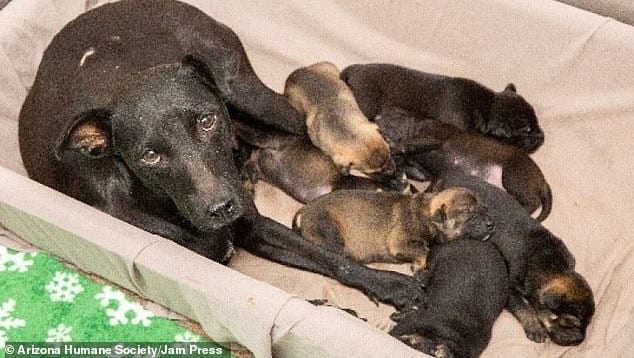 Seven puppies have been pulled out from underneath a house during a grueling two-hour rescue operation after their parents were seen crawling under the foundation.

Team members from the animal rescue organization Arizona Humane Society in Phoenix received several messages about stray dogs who kept entering a hole that had been dug under a house that was slated for demolition earlier this month, according to reports.

'When the EAMTs [emergency animal medical technicians] arrived on scene, witnesses stated that they believed the female dog had recently had puppies but they were nowhere to be found,' the Arizona Humane Society said.

Technician Theresa Scheckel noticed that the female dog looked like she had been nursing and decided to dig holes on each side of the house with the help of her partner Dan McGrath to see if the puppies were underneath.

When McGrath slid into the larger hole, he discovered the puppies in a pile. There were five males and two females in the litter, all of whom were less than two weeks old.

While under the house, he used a gurney to slide the puppies to Scheckel, who pulled them out from underneath the dwelling one at a time.